Warning: There is going to be a whole lot of shameless plugging in this post. Most of its for my own work, some of it is paid endorsements. It’s my blog, and I don’t do this often, but this stuff needs to be said. It’s the part of coaching that some people don’t care for – the tough love, the kick in the pants that gets you motivated and moving and calls you on all the B.S. reasons why you’re not doing what you know you were born to do. As for the offers, I promise I’ll only show you stuff that offers value to your life.

The song I’m singing in this video is one I wrote 7 years ago. It took me 7 years to finally decide to live up to the promise of those lyrics, step out onto the stage of the world, and make myself heard. The result? People love it. They are responding with open arms.

Why Did I Hold Back?

I Wasn’t Thinking About Other People

You Weren’t Given This Gift For No Reason

You’re a writer. Do you have any clue how powerful that is? Probably not. You have literally got the power to help people transform their lives with the words you write. You can paint a picture that helps them make sense of a world that often doesn’t. You can bridge gaps between different people by showing everyone a new perspective. You are a powerful person – but all the power in the world does no one any good if you won’t step up and USE IT!

Your Life Is No Accident

This is the truth. You weren’t born into this world by accident. You’re no random chance coincidence. You are Love’s answer to the needs of the past, present, and future. You matter. And it matters whether you show up or not. It matters whether you share your gifts or not. Your life does not belong to you, and what you do with it impacts all of us.

I Know You Think You Don’t Matter

I get it. You’ve been told so often how unimportant you are and how insignificant you are that you believe it. You think only people who are famous get to make a difference in this world but that’s so far from the truth it’s laughable. Let me tell you, bud. We can thank one administrator who decided to turn down Hitler’s art school application with arrogance and cruelty instead of kindness and encouragement for the rise of the Nazi party. That’s right. One guy was the difference between Hitler becoming an artist and Hitler becoming a mass murdering dictator. Nothing you do is insignificant. It only takes changing one life for the better to change the entire course of human history for the better.

Other People Think You’re Worthless. So What?!

Just because someone can’t see your worth, that doesn’t make you worthless. Dandelions are probably the most hated weeds on everybody’s lawn. That’s the honest truth. Nobody wants ’em. Nobody likes ’em. Unless you’re about 5 years old or younger, you just think they’re a pest you can’t get rid of but just because people think they are worthless doesn’t mean they aren’t worth anything. It just means people don’t understand their worth. Dandelions can’t talk. They can’t explain to you that they are filled with vitamins and minerals that your body needs for optimal health. They can’t tell you that if you pluck their leaves and their heads you can put together a Dandelion salad. They can’t talk about the way that they help to absorb and get rid of heavy metal toxins. Dandelions can’t talk. But you can. So get out there, you beautiful Dandelion, and prove your worth to the world. Show them what you’ve got, and stop using what other people think as an excuse for not doing what you were born to do!

Do Something You’ve Only Dreamt of Doing Before

I’ve dreamt of speaking on stage since I was a kid. I love being in front of a crowd. I thrive on the attention and knowing that people are reacting and responding to what I’m giving them. For some people, public speaking and singing would be a nightmare. For me, it’s a dream come true. And that is why I’m entering 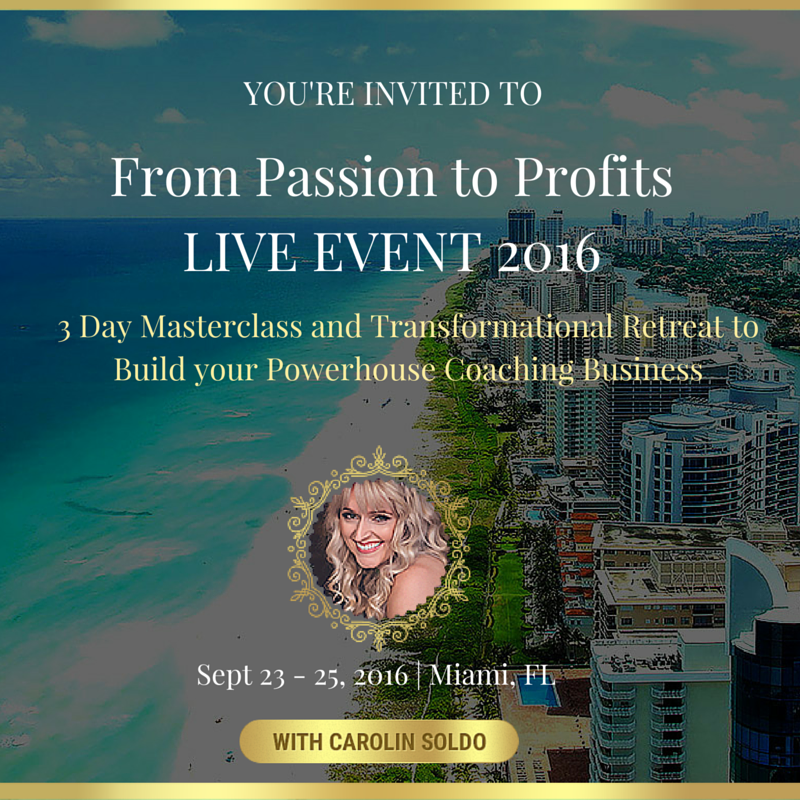 Carolin Soldo’s From Passion to Profits Live Event Contest to win a speaking engagement at her conference.

Haven’t you hidden yourself in the shadows enough? Isn’t it time for you to own your gift and put it to work for you? If you’re really ready to step up and own your voice, you don’t have to sing. I can teach you what you need to know. The admission isn’t cheap. But if you need payment plans, just let me know. I care way more about you getting your voice out there than I do about the money. Let’s make a deal, and let’s make this happen. It’s up to you. And if you just want me to write the thing for you, I can do that, too. Schedule an appointment and let’s explore a potential partnership.

There really aren’t any good reasons why you can’t get your stuff together and get it out there. There are reasons, but that doesn’t mean they are good reasons. And the best reason of all to put it out there is that there are people in the world who need what you have to offer and they’re not getting it because you’re holding out on them.

Know Someone Who Needs a Kick in the Pants? Share this!

If you know someone with talent who isn’t stepping up and owning it, do them a favor. Share this with them. Put it in an email, Tweet about it, Facebook tag them, whatever you’ve got to do to get their attention. Because you’re not just doing them a favor. you’re actively working to make the world a better place by changing their life for the better – or at least trying to. What they do with this information once they’ve got it is up to them. But you’ll know you at least got that ball rolling.