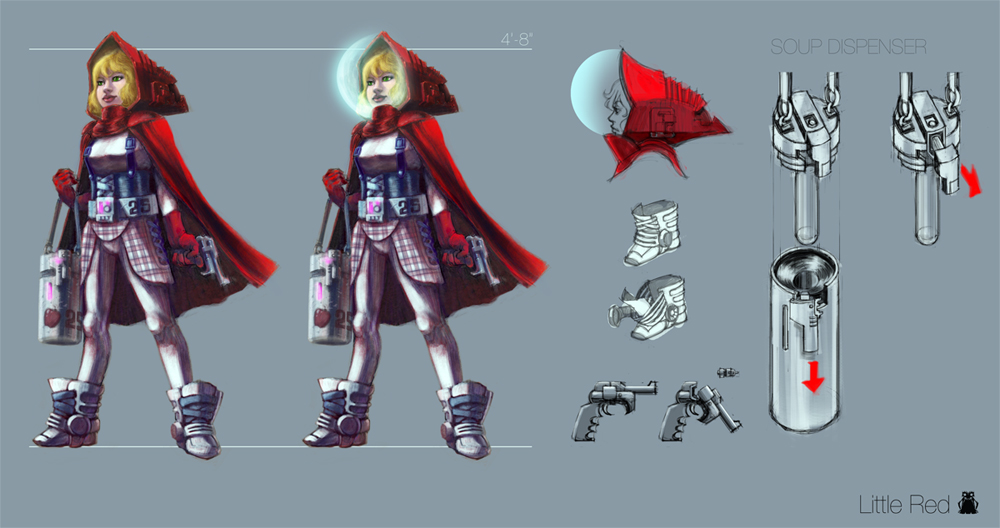 Over the last three installments of Story Telling 101, I’ve talked about how to take a well-known story, craft an outline for it, and start tailoring it to fit your style.  Today I’m going to cover taking that outline and adapting it for various genres.   If you have never thought of Little Red Riding Hood as something other than a fairy tale, hold on to your seats.

This isn’t your grandmother’s fairy tale.  We’re going to look at Little Red Riding Hood through the lens of science fiction, spy vs spy, mystery, and fantasy. Crafting your story for a particular genre starts with making simple modifications to the main characters.

Sarlett (Red) is sent by Commander Jeffries (Mother) to deliver a package to an ambassador (Granny) on a friendly planet (Granny’s house). On her way there, she receives an encoded message from an alien (the Wolf), and disobeys her instructions from the Commander to go investigate.  The alien is a secret enemy of the ambassador’s and decides to use the opportunity to kill two birds with one stone.

While Scarlett is distracted pursuing a false lead given to her by the alien, the alien infiltrates the Ambassador’s planet using information gleaned from Scarlett, kills the ambassador, and disguises himself in preparation for Scarlett’s arrival. Scarlett arrives, detects the deception, and is attacked by the alien.

The two fight, and the fight is overheard by guards (the Huntsman).  The guards come in, distract the alien, and Scarlett kills the alien. The guards then help Scarlett to revive the fallen ambassador.  Scarlett delivers the package and returns back to the mother ship.

Ruby (Red) is instructed by the FBI (Mother) to deliver an important message to an operative (Granny) working in the British Embassy (Granny’s house). On her way, she meets a fellow FBI agent (the wolf) who convinces her to go with him to dinner that night. Over drinks, she confides in him some of the details of her mission.

She ends up sleeping with him that night. While she is asleep, the agent uses the information to kidnap the operative and take her place.  Ruby goes ahead with her mission, realizes she’s been deceived, and the double agent attacks her, but not before Ruby can send out a call for help.

A man from MI-5 (the Huntsman), the British version of the CIA, intercepts the call and moves to investigate. He distracts the double agent, allowing Ruby to shoot him.  The two rescue the kidnapped operative and Ruby delivers the message before returning home.

Detective Joseph Gerber (the Huntsman) receives a call from Lina Cavalier (Mother).  Her daughter, Rosa (Little Red Riding Hood), hasn’t come home from her grandmother’s house and it’s been over a day.  No one is answering her calls.

He agrees to investigate and arrives at the house to find the door open, a trail of blood leading out the back door, an unconscious elderly woman, and no sign of Rosa.  His only clues are the blood trail, a basket, keys, and the purse on the table, and the signs of a struggle in the bedroom.

He must piece together the events that happened in order to find Rosa before it’s too late.

Fl’rylla, mother of all dragons, requests that her daughter, Crymson, deliver a gift to the Elven Ambassador, Sildynia, (Granny) on the Council of Elders.  The Council of Elders is comprised of the wisest among the elves, humans, dragons, fairies, ogres, and unicorns.  Its job is to keep the peace among the various magical beings of the land. The trip requires her to cross over Moondark Pass, an area which is filled with beauty but also many dangers.  Fl’rylla warns her daughter not to stop or to speak to anyone along the way.

Crymson agrees but as she is flying over Moondark Pass she notices an unusual shimmer in the area and stops to investigate.  The shimmer proves to be coming from a human magician named Rand Rydark (the wolf), who convinces Crymson to share her plans with him.  He then convinces her that the current gift would be greatly enhanced by the addition of some gems and gives her the location of a nearby mine.  While Crymson is busy collecting gems, Rand transports himself to the Council.

He gains admittance using the information he gathered from Crymson, kills Sildynia, and waits for Crymson’s arrival.  When she figures out his deception, he begins attacking the young dragon with spells.  The ensuing struggle is overheard by the Ogre Ambassador, Dragnar (the Huntsman), and he joins red in the battle against the human.

His distraction is all that Crymson needs to gain the upper hand and she is able to take out Rydark.  The Unicorn Ambassador, Luminia, uses her horn to resurrect Sildynia, and the council thanks Crymson and Dragnar for their help in ridding them of a dangerous enemy.

As you can see, there are plenty of ways to take that same story and make it totally fresh and new.  The elements don’t change, the outline still works.  The only thing that changes are the characters, the setting locations, and the exact events.   This actually works very well with any pre-existing story.  To craft completely new stories, you can even mix and match outline elements from other stories. The possibilities truly are endless.