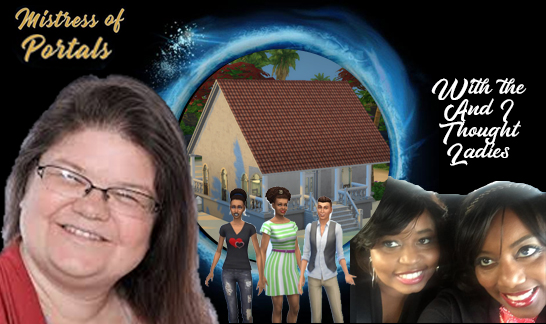 Watch #Stream the #Story Pt 17 | Enjoying Foreign Coffee with The Sims 4 & the And I Thought Ladies from MistressofPortals on www.twitch.tv

The Story Behind the Episode

I’ve known the And I Thought Ladies since January of 2016. I met them on the Segilola Salami Show, a podcast that features writers and authors. At the time, I was there to discuss my concept for the 40 Day Writer Reality TV Show, where I envisioned 40 writers coming together over 40 days to finish, polish, and pitch their books to publishers who would then compete, Shark Tank-style, for the rights to publish those works.

I thought at the time that I would need to raise 2.5 million dollars to film the first season, which would give me the proof of concept to take to Hollywood. The Ladies loved the idea and reached out to me afterward. They began introducing me to Hollywood producers and to someone who ran a reality TV show herself, the kind of people I would need to know to make this dream a reality.

The feedback I got wasn’t favorable. One producer told me that the idea was simply too “esoteric”, by which she meant that it had an appeal to only a very limited audience of people. I didn’t think to mention to her that 80-90% of Americans believe they have a book in them, even though fewer than 3% will ever sit down to write it and fewer still will take the steps to publish it.

Another person told me that if I did manage to get my concept sold to Hollywood, what would happen is that they would take my idea, pay me a pittance for it and hire a writer they believed could draw attention and viewers to be the face of that show. They wouldn’t use the coaches I’d recruited or the contestants I’d selected. They would, instead, choose their own. I would be written out of my own show. She asked me, “Is that what you want?”

We’ve been friends ever since. I’ve supported them in putting together the 25 Hottest Indies Magazine along with the And I Thought Literary Magazine for the past few years. They arranged a book tour for me in the UK last summer, which led to a speaking engagement in London this past February. It was their nomination that resulted in me receiving an Inspirational Women In Literature, Media, and Journalism award this past March.

It is also because of them that I was invited to present my unique method of character creation and development at the Las Vegas Writers Experience Retreat last year, where I met Tonya Todd of the Henderson Writers Group, along with Joylynn Ross of Path to Publishing. Tonya invited me to speak at the Las Vegas Writers Conference, and it is my participation in that conference that sparked my husband’s idea to help me get into streaming as a means of marketing and promoting my books.

So when I started Stream the Story on Twitch and decided to invite other authors to participate, they were the first people I invited. Unfortunately, life happened for them and several family emergencies cropped up so that they weren’t able to join me until now.

The Files for the Characters and Setting in this Episode

I have had requests for an easy place to grab the files so that people can play along. I’m making them available on my site, since The Sims 4 Gallery is broken and doesn’t work correctly. If you wish to use them, here is how to use them: