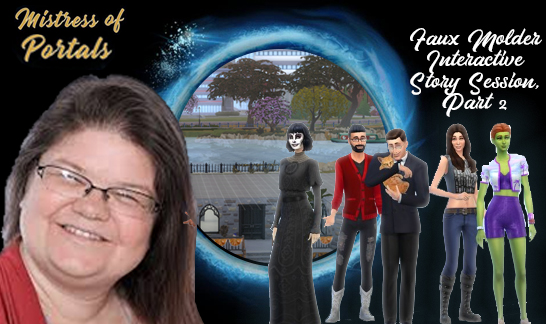 The Story Behind the Episode

It started with Episode 14. A streamer friend of mine, ZX_Speccy, was on my feed. I didn’t have anything planned or any authors scheduled, so I opened up the floor to him. He could direct the story we were telling that day.

As more streamers joined, we added more characters and expanded the story. When the household reached 5, we built the lot and jumped in to start telling the story. I added some of the background context for how it came to be that Faux Molder was living with all these strangers.

Faux Molder was a detective in search of proof of aliens living among us. That’s how he met Ember Rose, the green skinned, red-haired beauty that Faux convinced to stay with him so he could protect her from those who might exploit her or who might fear her and go after her. After all, just because she’s an alien doesn’t mean she’s bulletproof.

While working this case, he stopped in at the local coffee shop where his old college roommate, Denton Hipster, was working as a barrista. The guy was down on his luck and Faux had a few spare bedrooms in the house he bought, and so a deal was struck. Denton wouldn’t ask too many questions and had no problems living with an alien. Who was he to judge?

Just when he thought his life couldn’t get any more complicated, he got a phone call from his teenage cousin, Beatrice Templeton. Beatrice and her guardian, Lilith Nickademus, were being kicked out of their place and needed a “temporary” place to stay. Faux was the only one she knew that she thought might be able to help them.

Faux had a soft spot for the teen. He knew how hard things had been for her after her parents disappeared. He didn’t know much about her guardian, but a single woman taking on a teenage foster child couldn’t be all bad, right? So he agreed.

What he didn’t know was that his finding of Ember Rose was no accident. She was an undercover government agent who knew exactly where Faux’s weak points were and how to trigger them. She was sent to make sure that Faux didn’t get closer to the truth than the government wanted him.

Beatrice’s guardian, Lilith, was connected to the Simolean Crime Syndicate and was working her way up the ranks. She was training Beatrice to be her accomplice once she succeeded in taking over. Staying with Faux provided her cover for her criminal activities. Nobody was going to suspect her when she was living with an upright, honest detective like Faux.

Faux dreams of finding his one true love, even while working at the police station and working his way up the ranks to becoming a lead detective. To his surprise, he discovers a powerful attraction to the alien Ember Rose that seems to be matched by her own desires for him.

Ember’s work in gathering intelligence was earning her more complicated assignments, but her main assignment of keeping Faux busy turned steamy when she decided to accept his advances in order to win his trust. She discovered undeniable chemistry between them that was certainly going to make hiding things from Faux even more challenging than she’d thought.

Lilith’s instincts for knowing when to get out of there and when to take a stand led her to climb the ranks quickly. She was bringing home the money and raking in respect of her peers and superiors. Then she got pinched by a detective, who questioned her. She was offered a plea deal if she admitted to her crimes – but taking that deal meant scrapping her plans to be the world’s greatest criminal. She wasn’t going down like that. She called his bluff and walked, earning her even more respect.

However, every career advance for Faux put Lilith’s career prospects at greater risk. Plus, the sudden romance between Ember and Faux didn’t sit right with Lilith. She suspected the green girl wasn’t on the up-and-up, and Faux was too nice a guy to see through the ruse. Maybe it was time to use her own feminine wiles to charm Faux – and put his Boy Scout charm to work for her.

Denton was growing in his abilities to mix drinks and advancing his dream career as a barrista one cup at a time, but life as a coffee shop attendant was lonely. He dreamed of city life and making friends and maybe even sharing an apartment key someday. Then, to his shock and amazement, his dream girl showed up on his doorstep – literally – late one night. Could this be the turning point to seeing his dreams come true.

Grab the game files for use in your own sims game by clicking the button below.

Join the Next Stream

I stream every Tuesday, Thursday, and Saturday on Twitch.tv.

You can also join my Discord server for news, updates, and information at https://discord.gg/47jV9Z6 or follow me on Facebook at http://facebook.com/mistressofportals